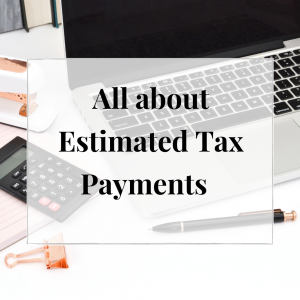 Estimated Tax Payments are a BIG pain point in the world of Self Employed Entrepreneurs.

This guide is to break down:

What are Estimated Tax Payments?

Taxes are considered a “pay as you go” system. When you are working for an Employer and receiving a W-2, you pay your taxes throughout the year and these payments are deducted right through your paycheck before you receive it. When you become Self Employed, that changes because you are now receiving all of your Income in your pocket. Since there is no Employer to withhold these Taxes, you are now responsible to withhold them yourself by way of Estimated Tax Payments. The reason why they are called “Estimated” is because you are literally estimating your income for the year and paying taxes on that amount.

This method serves as a way to pay tax on income that is not subject to tax withholding.

Who is liable to pay estimated tax payments?

Self employed Individuals are not the only ones subject to Estimated Tax Payments. This liability is created when you are receiving any income that is potentially not subject to tax withholding. Examples of this would be:

As a rule of thumb, in general, any individual who expects to owe $1,000 or more when the Tax Return is filed are generally expected to make estimated tax payments.

If you are working for an Employer, and you are owing Taxes on your Return, you should change your withholding to allow for more Taxes to be taken out of your Paycheck by filing a updated W-4 with your Employer’s Payroll Department.

When do you pay Estimated Tax Payments?

Estimated Tax Payments are broken down into 4 quarters. The payments are spaced out throughout the year usually due on April, June, September and January of the following year.

Q4- For the period September 1- December 31- Due Date: January 15 of the following year

How to pay Estimated Tax Payments?

You can pay your Estimated Tax payments by mailing it in using the Form 1040-ES. The easier way is to make your payment online using the IRS’s E-Pay system: https://www.irs.gov/payments

How much to pay in Estimated Tax Payments

5 thoughts on “All about Estimated Tax Payments”